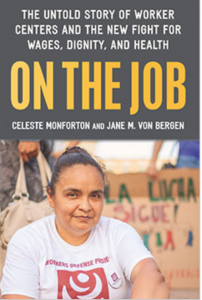 In their new book On the Job: The Untold Story of Worker Centers and the New Fight for Wages, Dignity, and Health (New Press, 2021), Celeste Monforton and Jane M. Von Bergen focus primarily on telling stories: Stories of workers from different backgrounds and industry sectors who band together and fight for safer and more humane workplaces in which they’re paid for the hours they work. The worker centers that are helping them win better corporate policies, protective legislation, and strong enforcement aren’t focused only on improving conditions for the individuals who come through their doors; their goal is to build worker power and achieve system-wide change.

Before I say any more about the book, I should acknowledge that being a friend and colleague of Celeste Monforton makes me a biased reviewer. I was predisposed to like On the Job, but I didn’t realize until I actually opened it for the first time how delightful it would be to read. Short chapters breeze by with tales of different workers and worker centers, containing just enough details and quotes to paint a vivid picture. I was familiar with many of the stories of worker center victories that have been featured here on The Pump Handle over the years. On the Job weaves such examples together to make clear that, although worker centers might have differences in their models and areas of focus, they share similar approaches to achieving their goals.

One of the themes that emerges from the book is worker centers’ responsiveness to local conditions and workers’ needs. In New York state, the Workers’ Center of Central New York and Worker Justice Center of New York helped dairy workers get the right to unionize and all immigrants the ability to get drivers’ licenses, while a broad coalition won protections for domestic workers. In Florida, the Coalition of Immokalee Workers won a penny-per-pound increase in wages for picking tomatoes. In Illinois, Arise Chicago and other organizations address protections for temporary workers in one of the nation’s shipping hubs. In Minnesota, Somali immigrants worked with the Greater Minnesota Workers Center to get poultry plant schedules that accommodate Muslim religious observance as well as a state law that makes wage theft a felony. In Texas, Fe y Justicia and the Workers Defense Project prioritized ensuring construction workers get rest breaks as they labor in sweltering temperatures. In California, the Centro Laboral de Graton offers trainings on how to respond to ICE raids, as well as a hiring hall that matches workers with employers who pledge to treat them fairly.

An illustration of this responsiveness is the fact that the New Labor worker center in New Jersey offers English lessons, because that’s what workers kept requesting. New Labor has since gone on to participate in successful campaigns for minimum wage and anti-wage-theft laws and ensuring temp workers’ inclusion in a paid leave law, but the English lessons came first.

Rather than create top-down campaigns, successful leaders recognize that workers know what they need and must be able to set their own priorities for action. Worker centers offer guidance and infrastructure, but successful ones know members’ leadership is essential. Martha Ojeda, a senior national organizer with Interfaith Worker Justice, explains:

Ojeda understands why campaigns fail. She has seen well-meaning worker center boards and staff who decide they need to have a campaign. They identify a topic. They know allies in the community, such as faith leaders and local unions, who will endorse the campaign. They might even have some funders in mind.

You can have “a beautiful campaign on paper,” she added. “It’s going to fail because you don’t have those who will really be carrying it on to take ownership of it.”

On the Job shows just how successful worker centers can be when they combine the movement’s wisdom and tactics with workers’ expertise and commitment to achieving justice and dignity. (Of course, funding is also important, and Chapter 13 recognizes the role of the Public Welfare Foundation and OSHA’s Susan Harwood grants.) A chapter on worker centers’ response to COVID-19 explains that the centers sprang into action to meet workers’ immediate needs for assistance when many of them were laid off, and that members who were already experienced in using their power quickly filed complaints with authorities when employers refused to adhere to health and safety guidelines.

Of course, if you want to learn about all of the ingredients that make worker centers successful, you’ll need to get your hands on a copy of On the Job. Monforton and Von Bergen have created an accessible book that’s both educational and enjoyable, and reading it is well worth your time.