Mail carrier Larry Chandler is always on the lookout for dogs.

“In this neighborhood, they just run kind of wild. …I’m familiar with the dogs along this street—where they are, where I should go, where I can’t go.”

Chandler’s route is in Greensboro, NC. It was the site this week of a dog attack to a fellow mail carrier, Katherine Cashion. She told KXII NBC 12 News the dog came out of nowhere.

“I was in so much pain, I thought the blood was just gushing, it hurt so bad.”  She had to use her hand-held scanner to hit the dog off her leg.

Like many employers, the USPS is required by OSHA to report amputations and injuries that result in amputations. Some of that data is available on-line and reveals the severity of the dog-attack injuries suffered by mail carriers. For example:

I asked a USPS spokesperson about their policy for withholding mail delivery because of an unrestrained dog. Here’s their response.

“Postal Service mail carriers take pride in delivering mail promptly and efficiently. That means being able to approach their customer’s mailbox without interference from a pet. It is the dog owner’s responsibility to control their pet. Most communities have ordinances for the control of dogs. In spite of the fact that Postmasters have frequently requested customers control their dogs, and have discontinued service to control this problem, injuries still continue.”

“Collection and delivery service personnel are to report the name and address of the customer where such interference occurs to the Postmaster or authorized supervisor, who must immediately telephone the customer and request that the animal be confined during the usual delivery hours in the neighborhood. The Postmaster or authorized supervisor must further inform the customer that (1) no deliveries will be made until this is done, and (2) service will be restored upon assurance that the animal will be confined. In extreme cases, delivery to an entire block or neighborhood may be affected until the situation is resolved.”

“The Postal Service regrets any inconvenience the interruption of mail delivery may cause; however, most would agree that the Postal Service must protect its employees from potential injury.” 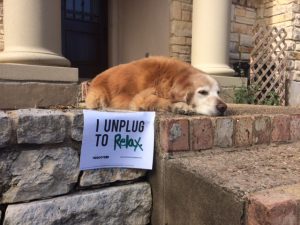 Our dog Laredo (left) is a 14 year-old, 70 pound golden retriever. He likes to hang out on the front porch.