The House Natural Resources Committee’s Oversight and Investigations Subcommittee scheduled a hearing called “The Denial Playbook: How Industries Manipulate Science and Policy from Climate Change to Public Health,” and the Democrats invited four witnesses to testify about the tactics and impacts of industry efforts to suppress and distort evidence about products’ harms. Republicans did not provide a single witness.

In fact, it became apparent soon after committee chair TJ Cox (D-Calif.) started the hearing that Republicans didn’t want it to happen at all. “This is now the seventh Oversight hearing related to climate change that the majority is holding this month, starting with a full committee hearing,” ranking member Louie Gohmert (R-Texas) complained. “It’s been a bit concerning how this all fits within this committee’s jurisdiction.”

Gohmert then moved to adjourn the hearing and called for a roll call vote. Four Republican members, apparently assembled for this purpose, voted for the adjournment, while Cox and Democratic member Debbie Dingell (D-Mich.) voted against. Based on that vote tally, the hearing adjourned, and Cox continued it as a “Democratic forum” – so, witnesses could still deliver their testimony and respond to questions, but it lacked the official designation of a hearing. 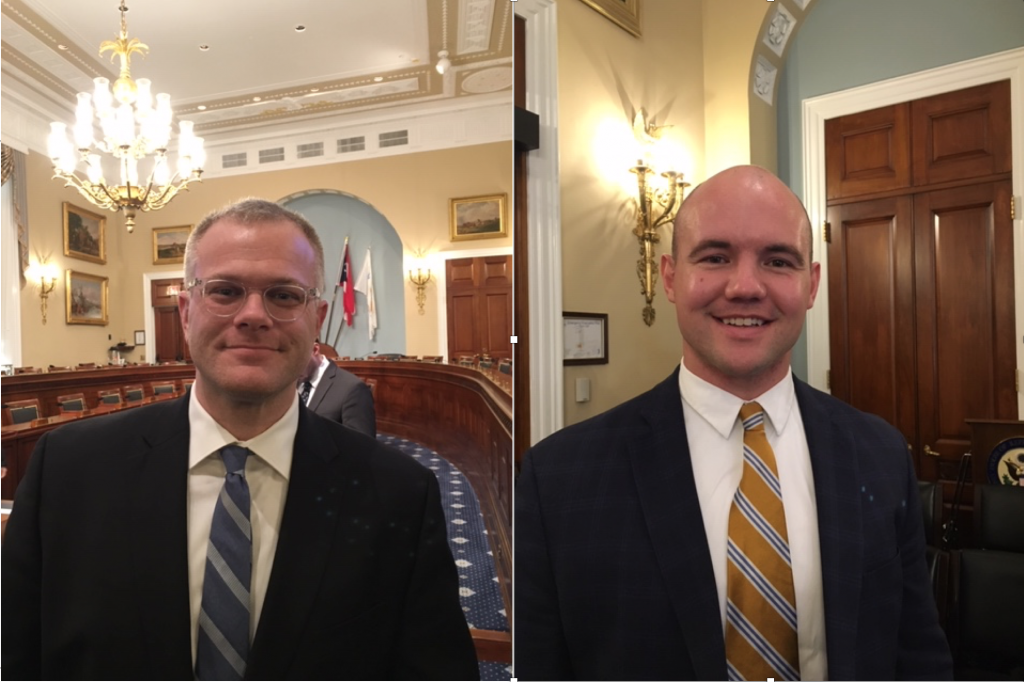 Ryan Hampton is in sustained recovery from an opioid use disorder that started when he received an opioid painkiller prescription for an ankle injury. He’s now a recovery advocate who launched the Voices Project and authored the book American Fix: Inside the Opioid Addiction Crisis — and How to End It. He told the subcommittee:

I didn’t know it, but the doctor who gave me my first prescription—and kept refilling it— was incentivized by the pharmaceutical company that manufactured the drug. She told me what that company’s marketing team had told her: that the pills weren’t addictive as long as my pain was real, that they weren’t “habit forming” if they were taken as prescribed, and that it was unlikely for me to experience withdrawal since I was given the prescription in a clinical setting. … These lies were not harmless: they were intended to boost Big Pharma’s profits, absolve the industry of any responsibility for the deaths their products caused, and shift the blame onto the people they sickened.

Hampton described a decade-long opioid addiction that left him homeless; he credits his mother’s love support for finally getting him to treatment. “My addiction stole 10 years of my life, and I will never get it back,” said Hampton. “Big Pharma is still playing a misinformation campaign” while we’re in a public health crisis.

Former football star Chris Borland was an All-American linebacker at the University of Wisconsin and led the San Francisco 49ers in tackles during his first year in the National Football League. “While an active player in the NFL, I spent 6 months studying the available research on the ramifications of repetitive brain trauma,” he told the subcommittee. “In relating what I found in the research to my own past experience with brain injury and to the demands of my job, I felt it was in the best interest of my personal health to stop playing football immediately.” In the past, Borland has spoken out about how “the NFL has been trying to sow doubt about the science behind brain injuries”; in these remarks, he warned that the National Collegiate Athletic Association’s “research into concussion is inherently flawed and … fails to portray an accurate risk of brain damage for athletes competing under their organization.” That’s because the research is based on reported concussions, but Borland’s history as a former Big Ten linebacker makes him very familiar with “disincentivization in reporting concussions.”

If opioid makers and the NFL had disclosed a decade ago what they knew about the harms associated with their products, thousands of people could have avoided terrible illness and early death. But the denial playbook pioneered by the tobacco industry requires burying evidence of harm and manufacturing uncertainty about health impacts. 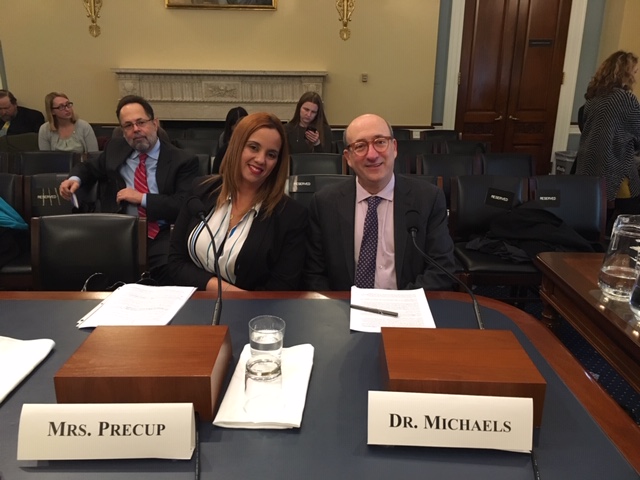 The costs of climate change denial

Fossil-fuel companies’ multi-decade campaign to deceive the public about their products’ role in climate change has cost us precious years of progress in implementing large-scale solutions to this global crisis. Accumulating evidence suggests we’re already seeing the impacts, including with hurricanes that are more intense than they otherwise would have been. Hurricane Maria in 2017 resulted in an estimated 2,975 excess deaths in Puerto Rico.

Alexandra Precup watched Hurricane Maria destroy everything her family had worked to build over the past decade, and then felt the impacts of the economic as well as environmental devastation of Puerto Rico. She was eventually forced to leave her children behind while she moved to Atlanta to find work with just $50 in her pocket, and they spent months apart until she could bring them to join her. “Climate change is real,” she said. “Maria taught us a tough lesson.”

In addition to three panelists with personal experience of the denial playbook’s toll, David Michaels shared insights from his many years of studying industry disinformation efforts. Michaels is the author of Doubt is Their Product: How Industry’s Assault on Science Threatens Your Health and the forthcoming The Triumph of Doubt: Dark Money and the Science of Deception; a professor at the George Washington University Milken Institute School of Public Health, where I also work; and former Assistant Secretary of Labor for Occupational Safety and Health (and, before that, a founding contributor to this blog). He told the subcommittee:

The denial playbook has been widely embraced, because it works. The strategy disingenuously demands proof over precaution in matters of the public good. For unethical corporations, there is no better way to stymie government efforts to regulate a product that harms the public or the environment; debating the science is much easier and more effective than debating the policy.

In America, people are innocent until proven guilty. Products have no such rights; we should and we must consider them dangerous until proven safe. For decades, the fossil fuel industry has turned the presumption of innocence upside down: manufacturing doubt to make their deadly products look safe while demanding that their harm be proven beyond a shadow of a doubt.

More details are in his written testimony.

When Cox asked panelists for closing thoughts, Hampton’s anguish was clear: “I buried over two dozen friends from overdoses,” he said. “You cannot trust industry when it comes to public health, safety, and wellbeing.”

“Climate change is the most pressing issue facing all of us right now,” Michaels concluded. “It’s no longer acceptable to parrot phony excuses – this is the moment when we need to take immediate action.” 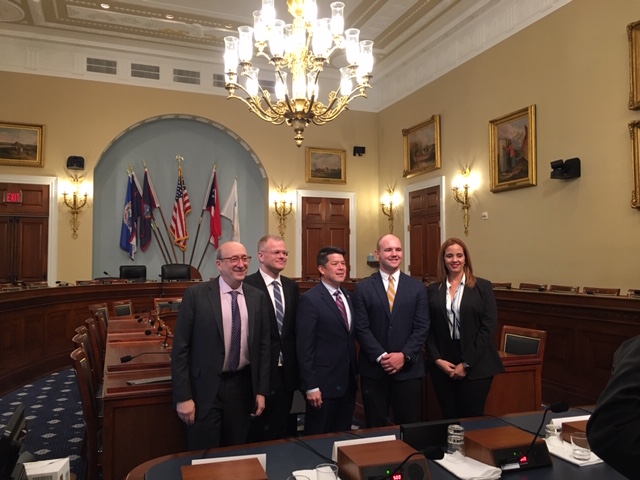 The current state of play

These days, it isn’t just industry denial we’re facing; lawmakers who don’t seem to want to believe that it’s time for tighter regulation are also playing along. Genna Reed of the Union of Concerned Scientists highlights five ways the Trump administration has enabled special interests to interfere in science-based policymaking, including reversing plans to ban the neurotoxic pesticide chlorpyrifos and creating a handpicked committee on climate change with the apparent goal of deciding that it isn’t such a big problem after all. For Climate Liability News, Dana Drugmand points out that Louie Gohmert received more than $35,000 in campaign contributions from the oil and gas industry last year. Perhaps that’s one of the reasons he’s so opposed to hearings that address climate change.

Revealing the denial playbook is an essential first step to rendering it less able to harm public health. To truly alleviate the harm it causes, though, we also have to mount a solid defense. All of us should call out disinformation when we see it, and media outlets need to get better at recognizing when the laudable goal of balanced coverage is allowing industries to advance a campaign of deceit that harms all of us in the end. Our federal government should establish a regulatory system that works to protect our health and safety, and doesn’t allow claims of uncertainty to justify regulatory inaction in the face of strong evidence of harm. Congress should exercise strong oversight and pass laws to protect scientific integrity.

Although last week’s hearing-turned-forum made this look like a partisan issue, it shouldn’t be. Having one party standing up for science and the other denying is playing into industry’s hands and harming our nation’s health.

One Small Step for Scientific Integrity at Federal Agencies January 23, 2022
SCOTUS Poised to Decimate Reproductive Rights December 5, 2021
With New Rule, Process of Rebuilding Title X Family Planning Network Begins October 17, 2021
Supreme Court Decision is the Beginning of the End for Abortion Rights September 6, 2021
Public health in an era of Big Tech: A call for a “Health in All Policies” approach August 17, 2021